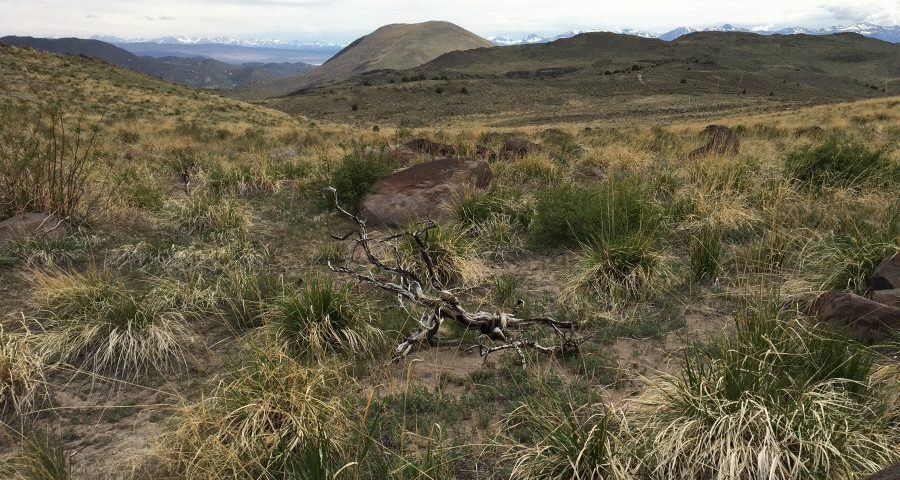 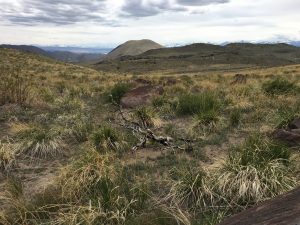 Spring Peak is in the southeast corner of the Bodie Hills, on the Nevada side. The road in is very rough, so casual explorers haven’t discovered it. It is tucked away but high enough to have views of the White Mountains, the Sierra, and Mono Lake. There are a few small springs that flow through a meadow that attract wildlife and some seeps that attract at least seven species of butterflies. I watched a pronghorn head toward the meadow, and I found big piles of burro or wild horse scat (hard to tell which), coyote tracks and scat, badger holes, and rabbit scat on my six trips there. I heard a rattlesnake in the grass, Western fence lizards on the volcanic rocks, and saw a pair of kestrels and a pair of red-tailed hawks, bluebirds, robins, a raven, and a juvenile sage grouse. In summer, the sulfur flowers are covered in bees, butterflies, and insects collecting pollen. It is a place that is alive and helping wildlife thrive. It’s just lovely there.

There are bi-state sage grouse here. (aka Mono Basin sage grouse) They are returning after a lightning strike wild fire burned the area in 2013. In the areas where the sagebrush is coming up, there are piles of sage grouse scat at the base of many of the shrubs that are about 1.5 feet tall, soft, and probably very tasty. A young sage grouse darted into a Great Basin wild rye for cover when I startled it. It had made a hole at the base of a large plant to hide in.

Because this was good sage grouse habitat before the fire and a sage grouse lek site where male sage grouse do mating dances, there were several habitat reclamation projects. The Nevada Department of Wildlife planted sagebrush seedlings in 2014  (1), the year after the fire. The USFS reseeded the area again in 2015 (2). A friend who volunteered in the 2015 effort remembers the area still being black and full of ash.

Those projects were done at the end of a four-year drought so the comeback was slow. Yet those efforts did eventually pay off. It took the big winter of 2017 followed by a second good winter in 2018 to get the seed to grow. So when I came along in 2020, it was on the road to recovery. There were various native grasses, sagebrush, rabbitbrush, ephedra, and elder, and more than 50 species of flowers. The meadow was green and thick with thatch. Springs were running, and seeps were moist, perfect for butterflies to go “mudding”. Unfortunately, cheatgrass grew in abundance as well.

Indigenous people used the Bodie Hills for thousands of years—all through the Holocene–and there is evidence of their presence here at Spring Peak. 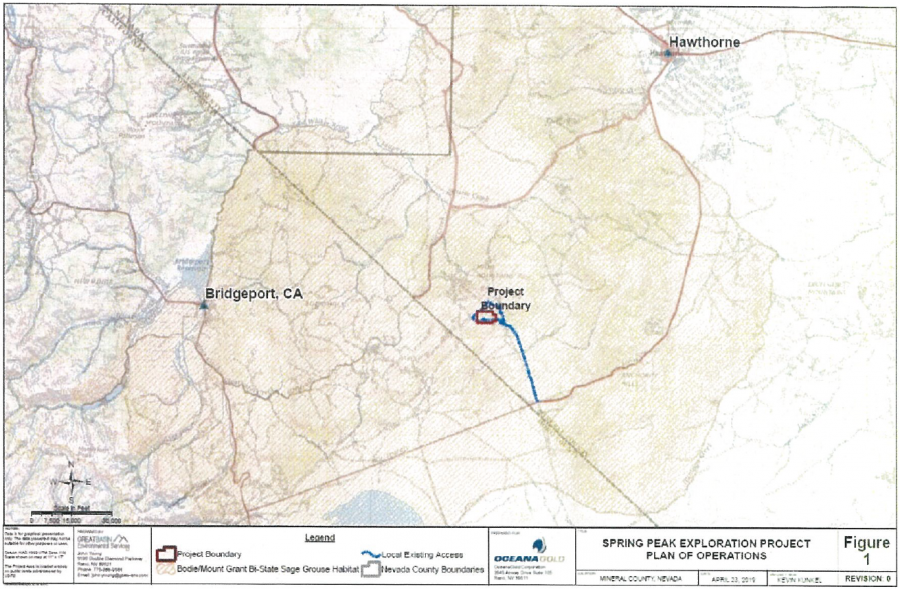 The project location relative to Bridgeport. The proposed location is directly in the middle of designated Sage Grouse Habitat, and the water feature on the bottom left is Mono Lake. (7)

However, this wonderful area is at risk of becoming an open-pit, cyanide heap-leach gold mine. There was a hot spring there 2.6-5 million years ago that brought flecks of gold to the surface from volcanic rocks that formed 12-13 million years ago. OceanaGold is searching for the veins of gold that underlie the hot spring.

It’s in Mineral County, Nevada. Nevada considers mining “a basic and essential activity making an important contribution to the economy of the State of Nevada”.  (3)   There are no laws restricting cyanide or mercury leaching. The historic mining town of Aurora is one hill over and is a reminder. OceanaGold has taken over the mining claims in the Spring Peak area and will be drilling at 23 locations. Each drill pad will be up to 60 ft.x70 ft. with a sump pit to catch the drilling cuttings and fluids. They will bulldoze and build roads to reach some of the sites.(4) Some of this disturbance will be in the burned area, but three of the sites and a staging/parking area will destroy old growth sagebrush that survived the fire. One of the roads will go across a slope of pinyon pine forest that also survived the fire. 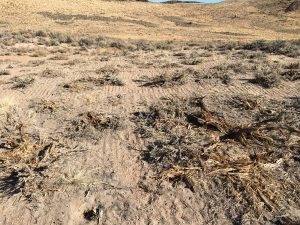 Stands of sage brush in the unburned section were pulverized by heavy equipment.

It’s one thing to dig up terrain that has been growing for only five years. It’s another thing to tear up vegetation that is decades old. 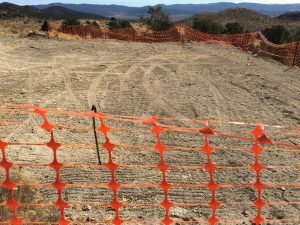 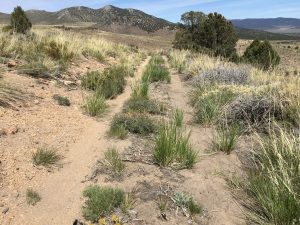 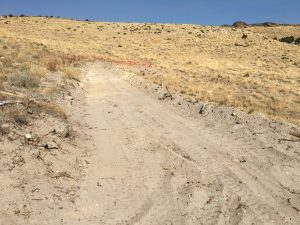 So far, OceanaGold has cleared five of the drill sites and weed-whacked the staging area. They have also cleared areas off to the side of the road on the way in. They have left their mark on the land, and it will be worse by the time they finish their exploratory drilling. It will take years for re-seeding to cover the scars. If the results of the drilling show there are sufficient quantities of microscopic gold there, it will lead to a mining operation which could destroy and contaminate that corner of the Bodie Hills forever with cyanide, mercury, and thallium. It will become a pit lake. OceanaGold does not have a very good track record at their Haile Mine in South Carolina (5). 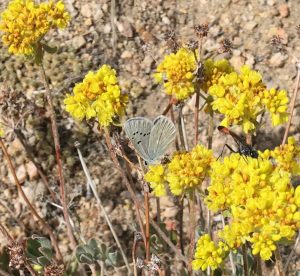 OceanaGold is a mining company, not an exploration company. They are spending $4 million for a 51 percent “earn-in” option in the project with the option to earn another 24 percent interest for $6 million more. (6) Our public lands serve multiple uses, however, mining reduces it to a single use and then when it is abandoned, it serves no purpose.

This article was originally published in the Sierra Club “Words of the Wild” newsletter, and republished with permission. All photos credit: Lynn Boulton 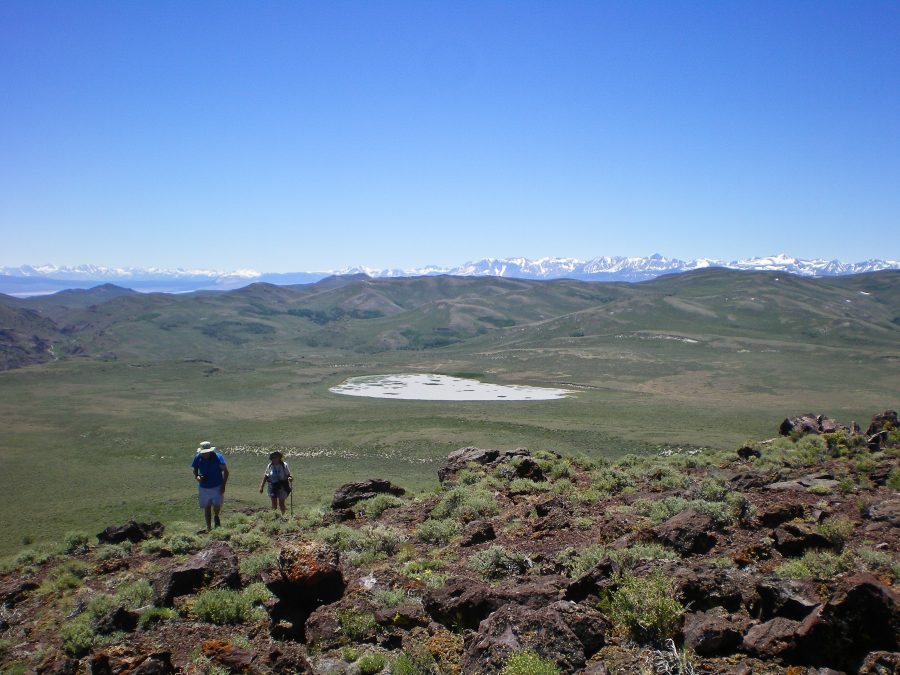