Prospecting for Gold in the Bodie Hills…Again

New Mining Ordinance Passed by Sante Fe County is the First of its Kind. 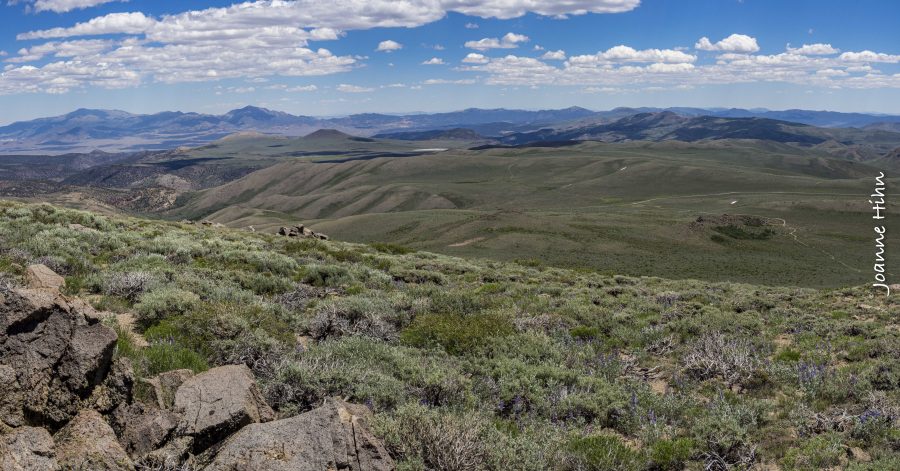 View of the Bodie Hills from Bodie Mountain. photo by Joanne Hihn

Thar’s gold in them thar hills….well yes, there is. How much, we don’t know. Most of the gold present in the Bodie Hills came with volcanic eruptions that occurred from 15 to 5.5 million years ago covering the area with lava, lava domes and stratovolcanoes like Mt. Biedeman and Masonic Mountain. It is called the Bodie Hills Volcanic Field. It formed when the Farallon Plate was subducted beneath the North American Plate and is part of the ancestral Cascades arc. There were numerous hydrothermal systems during this era that altered the rock and left mineral deposits with gold, silver, and mercury. The Bodie and Aurora mining potential was discovered millions of years later during the California Gold Rush.

Gold exploration companies have searched the Bodie Hills for the hydrothermally altered rock areas. They look for ancient hot springs, pools, and geyser vent mounds long solidified into rock called sinter terraces. If they find gold in those rocks, then they assume the gold came up with the hot water from veins of gold below. There are three mining districts in the Bodie Hills (Masonic, Bodie, and Aurora) and nine of these hydrothermally altered zones. The mining districts have been played out, but the alteration zones are still attracting prospectors.

The Paramount Mine located in the Bodie Hills was mined for mercury in the form of cinnabar in 1878, 1941-1944, and 1968. Antimony and arsenic are also present in this alteration zone. In recent decades, gold seekers have been eyeing the Paramount-Bald Peak alteration zone for gold, not mercury: Homestake, Molycorp, Noranda, Equinox, Cougar Gold and now Radius Gold.

About two years ago, Radius Gold, a Canadian company, requested a permit from the U.S. Forest Service to do exploratory drilling near Bald Peak in Nevada at the east end of the alteration zone. That permit request is still in process. Now Radius Gold is applying for permits from Mono County and the State Lands Commission to do exploratory drilling in the Bodie Hills. The California site is near Beauty Peak between Rough Creek and the northern most Dry Lake. The parcel was originally a State School Land parcel. It was sold years ago and is now owned by a local rancher. However, the mineral rights stayed with the state. Two years ago, the State Lands Commission issued Radius Gold a permit for hand prospecting, which has just expired. Now Radius Gold is asking for permits to drill holes at 9 locations using helicopters to bring the equipment in since there are no roads currently going to that parcel.

Because there is a road part way to the Beauty Peak site from the south, they hope to drive the crew in to the site through the Bodie Wilderness Study Area (WSA) across the Dry Lakes Plateau from Bodie State Park. However, the current road is in poor shape and accessible only to high clearance 4 x 4 vehicles, so improvements to the road in the WSA would trigger BLM review. There are many issues and concerns with this proposal: source for water for drilling, road access across a WSA and potential damage to rare plants and cultural resources, waste water and rock disposal, reclamation, impacts to the sage grouse, wildfire potential, etc. Mining might be done via underground tunnels, but it is more likely to be open pit mining, because it is cheaper. We think it must trigger a CEQA process.

The Bodie Hills Conservation Partnership (BHCP) and its member groups will be mounting a campaign pushing back on this. The Sierra Club Range of Light Group is one of the partners. The goal of the BHCP is to protect the Bodie Hills with national monument status or a similar conservation designation. The mining threats come and, so far, go, but a permanent protection is needed to keep mining out of the Bodie Hills.

The Bodie Hills are home to the largest population of Bi-state Sage Grouse, to pronghorn, pygmy rabbits, pikas, and rare plants. It is covered in wildflowers in the spring and covered in snow in winter. Due to its high elevation, the Dry Lakes have been ephemeral wetlands all through the Holocene when other parts of the Great Basin were dry in droughts. Its ecosystems are at the crossroad of the Sierra Nevada and the Great Basin, resulting in species and habitat diversity. It offers stunning views of the Sierra crest, Mono Lake, and the Sweetwaters. It is truly a place worth protecting.